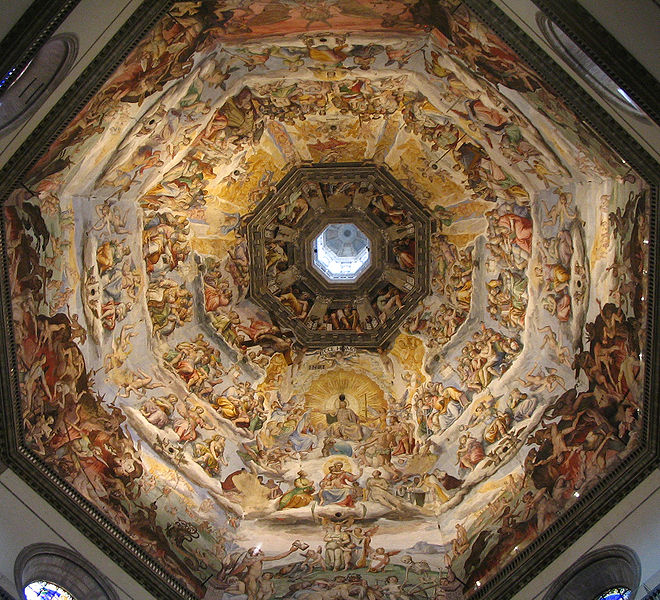 -Florence Italy’s cathedral (Duomo) stands tall over the city with its magnificent Renaissance dome designed by Filippo Brunelleschi. The cathedral named in honor of Santa Maria del Fiore is a vast Gothic structure built on the site of the 7th century church of Santa Reparata, the remains of which can be seen in the crypt. The biggest artwork within the cathedral is Giorgio Vasari’s frescoes of the Last Judgment (1572-9): they were designed by Vasari but painted mostly by his less-talented student Frederico Zuccari by 1579.

“The [main charter] for all Christian evangelists is Christ’s great commission: “Go therefore and make disciples of all nations . . . teaching them to observe all that I have commanded you” (Matt. 28:19-20). Notice Christ’s command restricts the Christian evangelist to teaching only what Christ revealed and not his own opinions.

It’s true all members of the Catholic Church are bound to believe in the dogma of purgatory. But it’s not true that it’s made up.

In answering this claim, the Catholic apologist could turn to St. Paul’s classic text in 1 Corinthians 3:11-15 wherein he explains how the soul suffers loss through a purgation of fire on the day of judgment but yet is saved.

However, the question I want to consider in is, “Is there any evidence that Jesus taught such a place exists?” If so, then the Church’s usage of 1 Corinthians 3:11-15 for purgatory would be more persuasive.

There are two Bible passages where Jesus taught the reality of purgatory: Matthew 5:25-26 and Matthew 12:32.

Forgiveness in the age to come

“And whoever says a word against the Son of man will be forgiven; but whoever speaks against the Holy Spirit will not be forgiven, either in this age or in the age to come.”

I would argue that the “age” (or “world,” as the Douay Rheims translates it) that Jesus refers to in this passage is the afterlife. First, the Greek word for “age,” aion, is used in reference to life after death in Mark 10:30, when Jesus speaks of eternal life as a reward in the “age to come” for those who give up temporal things for His sake. This doesn’t mean Jesus is teaching purgatory is eternal, since He teaches souls who are there can get out by having their sins forgiven, but He is asserting this state of being exists in the afterlife.

Aion can be used to refer to a distinct period of time in this life, as in Matthew 28:20 when Jesus says He’ll be with His apostles until the end of the “age.” But I think the context suggests it’s being used for the afterlife. Just a few verses later (v. 36) Jesus speaks of the “day of judgment,” which, according to Hebrews 9:27, comes after death.

So what do we have? We have a state of existence after death wherein the soul is being forgiven of sins, which in light of the Old Testament tradition (Psalms 66:10-12; Isaiah 6:6-7; 4:4) and Paul’s writings (1 Corinthians 3:11-15) means the soul is being purged or purified.

This state can’t be heaven, since there are no sins in heaven. It can’t be hell, since no souls in hell can have their sins forgiven and be saved. What is it? It’s purgatory.

The second Bible passage where Jesus teaches the reality of purgatory is Matthew 5:25-26:

“Make friends quickly with your accuser, while you are going with him to court, lest your accuser hand you over to the judge, and the judge to the guard, and you be put in prison; truly, I say to you, you will never get out till you have paid the last penny.”

Jesus makes it clear that the offender has to pay for his sins. But the question is, “Is Jesus referring to a place of repayment in this life or the next?” I argue the next.

The first clue is the Greek word for “prison,” which is phulake. St. Peter uses this Greek word in 1 Peter 3:19 when he describes the prison in which the Old Testament righteous souls were kept before Jesus’ ascension and that which Jesus visited during the separation of his soul and body in death. Since phulake was used for a holding place in the afterlife in the Christian tradition, it’s not unreasonable to conclude that’s how Matthew is using it in Matthew 5:25, especially when one considers the context, which constitutes our second clue.

The verses before and after the passage under consideration include Jesus’ teachings about things that pertain to the afterlife and our eternal salvation. For example:

It would be odd for Jesus to give teachings about the afterlife immediately before and after Matthew 5:25 but have Matthew 5:25 refer only to this life. Therefore, I think it’s reasonable to conclude Jesus is not referring to a place of repayment for sin in this life but of one in the afterlife.

“But,” you say, “just because it’s a place of repayment after death doesn’t mean it is purgatory. It could be hell, right?” There are two clues that suggest this “prison” is not hell.

Second, Jesus says the individual must pay the last “penny.” The Greek word for “penny” is kondrantes, which was worth less than two percent of a day’s wage for a first-century agricultural laborer. This suggests the debt for the offense is payable, and thus a temporary punishment.

St. Jerome makes the same connection: “A farthing [penny] is a coin containing two mites. What he says then is, ‘Thou shalt not go forth thence till thou hast paid for the smallest sins” (Thomas Aquinas, Catena Aurea: Commentary on the Four Gospels: Collected out of the Works of the Fathers: St. Matthew; emphasis added).

Contrast this with the debt owed by the wicked servant in Matthew 18:23-35. The servant in the parable owed the king “ten thousand talents” (v. 24). A talent is the largest monetary unit, worth 6,000 denarii. A denarius typically is worth a day’s wage.

According to the narrative, the king forgave the servant’s debt. But because he didn’t show the same mercy to those who owed him, the king handed the wicked servant over to the jailers “till he should pay all his debt” (Matt. 18:34). Given the overwhelming amount of the servant’s debt, it’s reasonable to conclude Jesus was referring to the eternal punishment of hell.

The “penny” of Matthew 5:26 stands in stark contrast to ten thousand talents. Thus, it’s reasonable to suggest Jesus is referring to a temporary prison in Matthew 5.

Let’s take stock of what we have so far. First, Jesus is speaking about matters of eternal importance within the context. Second, He uses the word “prison” which in the Christian tradition is used in reference to a state of existence in the afterlife that is neither heaven nor hell. And third, this prison is a temporary state of existence in which one makes satisfaction for his offenses.

So what is this “prison?” It can’t be heaven, since heaven implies all past sins are forgiven and made up for. It can’t be hell, because the prison of hell is everlasting—there is no getting out. It seems that the only interpretative option is purgatory.

“[I]nasmuch as we understand “the prison” pointed out in the Gospel to be Hades, and as we also interpret “the uttermost farthing”to mean the very smallest offence which has to be recompensed there before the resurrection, no one will hesitate to believe that the soul undergoes in Hades some compensatory discipline, without prejudice to the full process of the resurrection, when the recompense will be administered through the flesh besides (A Treatise on the Soul, ch. 58).”

The purgatorial twist on these texts becomes even more persuasive when we consider the Jewish theological milieu in which Jesus gave these teachings. It is evident from 2 Maccabees 12:38-45 that the Jews believed in a state of existence after death that was neither heaven nor hell, a place in which the soul could be forgiven of sins.

Whether you accept 2 Maccabees as inspired or not, it does give historical warrant for this Jewish belief. And it was that Jewish belief that Jesus’ audience would have brought to His teachings about the forgiveness of sins in the age to come and a prison in the afterlife where an offender pays off his debt.

But Jesus didn’t give any sort of clarification. Therefore, it’s reasonable to conclude that the age to come in Matthew 12:32 and the prison in Matthew 5:25-26 refer to purgatory.

Contrary to what many Protestants think, the Catholic Church didn’t make up the dogma of purgatory. It’s a belief that comes from our Lord Himself as found in Sacred Scripture. Therefore, the Catholic Church can say in good conscience that it has been faithful to the great commission to teach all that the Lord has commanded.”