I find I need REAL sinners in my relating towards my own sinfulness and redemption.  I love Jesus, and He is my constant inspiration, dare I say companion, but it can be a little hard to relate to an infinitely transcendant God, at least for me, on a constant basis.  Maybe you get it, but I struggle.

My fellow mortals, on the other hand, I seem to relate to readily.  And, I am inspired by how they responded, in faith, to a very real world, each of their own time.  I hope and trust you may sense method to my madness.

Maximilian Kolbe’s proximity to our own time certainly makes him more tangible, and some of our beloved elders still hold that terrible time in living memory.

“The most deadly poison of our times is indifference. And this happens, although the praise of God should know no limits. Let us strive, therefore, to praise Him to the greatest extent of our powers…For Jesus Christ I am prepared to suffer still more.”
– Saint Maximilian Kolbe, Auschwitz prisoner #16670, Franciscan priest, missionary, martyr of charity.

He took the place of Francis Gajowniczek who was married with young children who had been condemned to die along with nine others by order of SS-Hauptsturmfuhrer Karl Fritzsch, the Lagerfuhrer (i.e., the camp commander), as punishment for the escape of a prisoner from the camp in late July, 1941.  (The man who had disappeared was later found drowned in the camp latrine.)

When selecting the prisoners to die, the Nazi guards selected one man from each line at random, including Sergeant Francis Gajowniczek, when the sergeant cried out, “My wife and children.  I shall never see them again!”.  A man stepped out from the rows and offered to take his place.  It was prisoner #16670, Maximilian Kolbe.

A Nazi officer asked Kolbe who he was.  Kolbe responded, “I am a Catholic priest.  I wish to die for that man.  I am old.  He has a wife and children.”  Remember, Auschwitz was a work camp first and an extermination camp later and had the horrific deception cast in iron above the main entrance, “Arbeit Macht Frei!” – Work Makes You Free!  So, a younger prisoner was more valuable to the Nazis than someone passing middle-age.

So it was that Maximilian Kolbe and the nine others were taken to the death chamber of Block 11, notorious for torture.  Kolbe was placed in cell 18.   In the “block of death” they were ordered to strip naked, and their slow starvation began in darkness. But there was no screaming. During the time in the cell, Fr. Kolbe led the other condemned men in songs and prayer. Francis Gajowniczek was set eventually set free from Auschwitz when it was liberated by the Allies. Pope John Paul II canonized Maximillian Kolbe on 10 October 1982, in the presence of Gajowniczek.

During the first two weeks of August, 1941 the condemned prisoners were deprived of any food or water.  One after the other died, until only four were left including Maximilian.

The Nazis felt that death by starvation was taking too long for the remaining four and the cells were needed for newly condemned.  So, each prisoner in turn was given a lethal injection of carbolic acid (phenol) in the vein of his left arm.  Maximilian, with a prayer on his lips gave his arm to his executioner.  Maximilian Kolbe was 47 years old when he was executed.  His remains were cremated in the ovens at Auschwitz and his ashes dumped, like so much trash, along with the rest, near the camp, as had and would so many others.

As a child, he was known to be mischievous and sometimes considered wild, and a trial to his parents. However, in 1906 at Pabianice, Poland, at age twelve and around the time of his first Communion, Raymond, his baptismal name, Maximilian was his religious name, reports he received a vision of the Virgin Mary that changed his life: “I asked the Mother of God what was to become of me. Then she came to me holding two crowns, one white, the other red. She asked if I was willing to accept either of these crowns. The white one meant that I should persevere in purity, and the red that I should become a martyr. I said that I would accept them both.”

“Courage, my sons. Don’t you see that we are leaving on a mission? They pay our fare in the bargain. What a piece of good luck! The thing to do now is to pray well in order to win as many souls as possible. Let us, then, tell the Blessed Virgin that we are content, and that she can do with us anything she wishes.” -Maximilian Mary Kolbe, when first arrested.

“Love without penance, without sacrifice, is not love. There are souls who would like to possess the love of God, but they avoid and fear to do penance. Without the spirit of penance and self-abnegation, there can be no love.” –St. Maximilian Kolbe

“The most deadly poison of our times is indifference. And this happens, although the praise of God should know no limits. Let us strive, therefore, to praise Him to the greatest extent of our powers.” -St. Maximilian Kolbe

St Maximilian Kolbe is the patron of addicts. 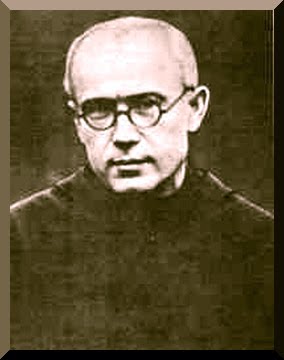 O Lord Jesus Christ, You who said, “greater love than this no man has, that a man lay down his life for his friends” (Jn 15:13), through the intercession of St. Maximilian Kolbe, whose life illustrated such love, we beseech you to grant us our petitions . . .

(here mention the requests you have).

Through the Militia Immaculata movement, which Maximilian founded, he spread a fervent devotion to Our Lady throughout the world. He gave up his life for a total stranger and loved his persecutors, giving us an example of unselfish love for all men – a love that was inspired by true devotion to You, in imitation of Mary.

“Be a man, be a Catholic, don’t blush for your convictions. Be a man.” – Saint Maximilian Kolbe

“Let us remember that love lives through the sacrifice & is nourished by giving.” – St M. Kolbe