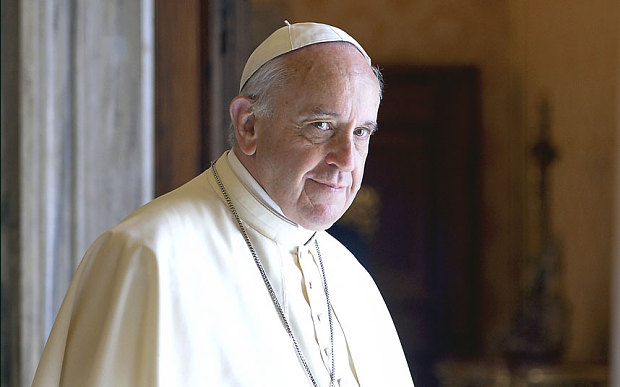 “Half-hearted Catholics–those who believe only some of the Church’s teachings–aren’t really Catholics at all. “They may call themselves Catholic,” said Pope Francis at his morning Mass (6/7/14)  at the Domus Sancta Marthae, “but they have one foot out the door.”

The Holy Father drew his inspiration from the Gospel reading for June 5, taken from John 17:20-26, and Jesus’ prayer that there would be unity, not divisions and conflict, among his followers. He singled out three groups of people whose half-hearted acceptance of faith drew into question their membership in the Church:

“Uniformists” who believe that everyone in the Church should be just like them. “They are rigid!” said the Pope. “They do not have that freedom the Holy Spirit gives,” and they confuse what Jesus preached with their “own doctrine of uniformity.” Jesus never wanted the church to be so rigid, Pope Francis said. Such people “call themselves Catholics, but their rigid attitude distances them from the Church.” The Pope likened the “uniformists” to the early Christians who demanded that pagans become Hebrews before they could enter the Church, when this was not what God intended.

“Alternativists” are those who hold alternative teachings and doctrines. They, according to Pope Francis, have “a partial belonging to the church. These, too, have one foot outside the church. They rent the church,” not recognizing that its teaching is based on the preaching of Jesus and the apostolic tradition. The “alternativists” are today’s “Cafeteria Catholics” who accept some teachings, but not the teachings which they find inconvenient or which they don’t really understand.

“Businessists” are those who use the Church “for personal profit.” Pope Francis noted that they call themselves Christians, but don’t enter into the heart of the Church. “We have all seen them in parish or diocesan communities and religious congregations,” said Francis, “they are some of the benefactors of the Church. They strut around proud of being benefactors; but in the end, under the table, they make their deals.”

The Church, Pope Francis taught, is made up of people with a variety of differences and gifts. If one wants to belong to it, he or she must be motivated by love and must enter with “your whole heart.” The Pope explained the correct approach to the Church, according to L’Osservatore Romano:

But Christ’s message is quite different: to all these types, the Pontiff continued, Jesus says that “the Church isn’t rigid, it’s free! In the Church there are many charisms, there’s great diversity in people and in the gifts of the Holy Spirit. Jesus says: in the Church you must give your heart to the Gospel, to what the Lord has taught, and never have an alternative for yourself! The Lord tells us: if you want to enter the Church”, do so “for love, to give all, all your heart and not for doing business for your benefit”. Indeed, “the Church is not a house for rent” for all those who “want to do as they please”; on the contrary, “it is a home to live in”.

Pope Francis called for a docility which transforms the Church from a house “for rent,” into a house in which everyone feels at home. “I’m at home,” he said, “because the Holy Spirit gives me this grace.”

In the Prayers of the Faithful, Pope Francis prayed for the grace of unity in the Church: to be brothers and sisters in unity, feeling right at home. He prayed for “unity in the diversity of everyone… but free diversity,” without imposing conditions.

In his closing invocation, he prayed that we would create this harmony in our communities, parishes, dioceses, and movements.

He reiterated the message from his first Mass in Jordan, when he said:
“The mission of the Holy Spirit… is to beget harmony–He himself is harmony–and to create peace in different situations and between different people.”

Love, and always begging Him to be His servant,
Matthew