Also known as the “Common Doctor/Doctor Communis”, which is high praise, meaning his opine is universal, something for everyone, relevant in every situation.

Probably, for me, the highlight, liturgically, of the year is Holy Thursday, after communion has been distributed and the priest is enwrapped in cope, incense is lit, the Blessed Sacrament is placed in the monstrance, the procession to the place of reservation begins and Pange Lingua, attributed to St Thomas Aquinas, and not just because I am his wonk, is sung beautifully and reverently, nearly as chant…

“Sing, my tongue, the Saviour’s glory,
of His Flesh, the mystery sing;
of the Blood, all price exceeding,
shed by our Immortal King…

Faith for all defects supplying,
Where the feeble senses fail…”

It is very moving for me.  My mother always taught me to genuflect on both knees when the Blessed Sacrament is exposed.  The altar is then stripped and ornamentation in the sanctuary is removed in anticipation of the events remembered the following day.  There is such a peace, solemnity, silence, and profound meaning beyond words I look forward to each year.

I tried reading the Summa on my own, once, and only once.  Emphasis on the word “tried” and “once”.  I quickly gave up.  Calculus is easier, more self-evident.

There are a great number of erudite tomes way over my head which are best introduced to the novice, literally, with a well seasoned, compassionate guide to whom the bewildered, overwhelmed student can revert with great frequency, great frequency, receiving tender mercies of experienced instruction and wisdom, presuming these qualities are present in the teacher.  Thank God for merciful instructors.  We would never graduate without their encouragement and support.  I try to imitate that with my own students, who, too, are deeply grateful, usually, but there are some… 🙁  For those students, I have to pray even harder!!! 🙂

Don’t try the Summa on your own, boys and girls.  Fair warning.  Many of the original works of the Church Fathers fall into this category as well.  You have been fairly warned!  I have the intellectual scars from those “knowledge bombs”, a term one of my students recently introduced me to, to prove it!  Wanna see?  🙂

St. Thomas Aquinas was born January 28, 1225, in Aquino, a town in southern Italy from which he takes his surname. In his masterwork, Summa Theologica, he represents the pinnacle of Scholasticism, the philosophical and theological school that reconciles faith with reason and the works of Aristotle with the scriptures.

At the time Thomas lived, the works of Aristotle were being rediscovered in the West and great Christian thinkers of the day spent a good deal of attention and effort trying to unify Divine revelation with human philosophy.  In the East, intellectual life flourished.  The West was still recovering from the inertia of the “Dark Ages”, where little intellectual innovation occurred.  It is said St Thomas was the spark who prepared the the West for the Renaissance.  Aristotle had been preserved in Arabic, and Islam was producing great Aristotelian thinkers.  Western Christians needed to respond in kind.

The family of Thomas Aquinas was a noble one, his parents, the Count of Aquino and Countess of Teano, were related to Emperors Henry VI and Frederick II, as well as to the Kings of Aragon, Castile, and France.  He was the youngest of eight children.

During his early education, Thomas exhibited great acumen in the medieval trivium of grammar, rhetoric, and logic. Described as “a witty child”, who “had received a good soul”, even as a child student, he posed the question to his instructors, “What is God?”

Because of his high birth, Thomas’ entry into the Dominican order in the early 1240s was very surprising, and especially disturbing to his family. They especially opposed entry into “mendicant”, or begging orders, who beg for their sustenance, thinking it far below their family status.

Thomas’ family employed various means to dissuade him from his vocation, including kidnapping him and imprisoning him for two years.  Thomas spent his time tutoring his sisters, and communicating with other Dominicans.  His resolve was strong.  Family members became desperate to dissuade Thomas, who remained determined to join the Dominicans. At one point, two of his brothers resorted to the measure of hiring a prostitute to seduce him. Thomas drove her away wielding a fire iron. That night two angels appeared to him as he slept and strengthened his determination to remain celibate giving him a mystical belt of chastity.  He never faced sexual temptation again. (????!!!! Really? Wow? :< I guess. Mixed feelings on that one…. 🙂 [I DO like my sin, unfortunately. 🙁 Give me strength, Lord! :] Concupiscence.

Upon his escape, which was arranged by his mother, Theodora, as a face saving measure, rather than all out surrender to a religious order, Thomas returned to the Dominicans and his studies.  Since, “still waters run deep”, Thomas was a thoughtful, and hence, quiet student.  His taciturn nature was deceiving.  So much so, his classmates thought him dim-witted.  Possessing hefty stature, his classmates nick-named him “The Dumb Ox!”

After a stint as a student in Paris, Thomas made his way to Cologne to teach, receiving ordination to the priesthood in 1250. Soon after this, he was assigned to teach at Paris, where he also worked toward his degree of Doctor of Theology, which he received in 1257, with his friend St. Bonaventure, after some intramural political difficulty.

The remainder of his life was spent in prayer, study, and writing his great Summa Theologica, a systematic attempt to present the findings of scholasticism. Although Thomas is sometimes perceived simply as an analytical and methodical writer, he was, especially in his later years, given to periods of mystical ecstasy. During one such experience, on December 6, 1273, he resigned from his writing project, indicating that he had perceived such wonders that his previous work seemed worthless.  During the Feast of St. Nicolas in 1273, St. Thomas Aquinas had a mystical vision that made writing seem unimportant to him. At Mass, he heard a voice coming from a crucifix tell him, “Thou hast written well of Me, Thomas; what reward wilt thou have?” to which St. Thomas Aquinas replied, “None other than Thyself, Lord.”

When St. Thomas Aquinas’ confessor, Father Reginald of Piperno, urged him to keep writing, Aquinas replied, “I can do no more. Such secrets have been revealed to me that all I have written now appears to be of little value, as so much straw.” St. Thomas Aquinas never wrote again.

The Summa Theologica was left unfinished, proceeding only as far as the ninetieth question of the third part. St. Thomas Aquinas died a few months later, on March 7, 1274. Today, Thomist theology stands at the center of the Roman Catholic tradition. 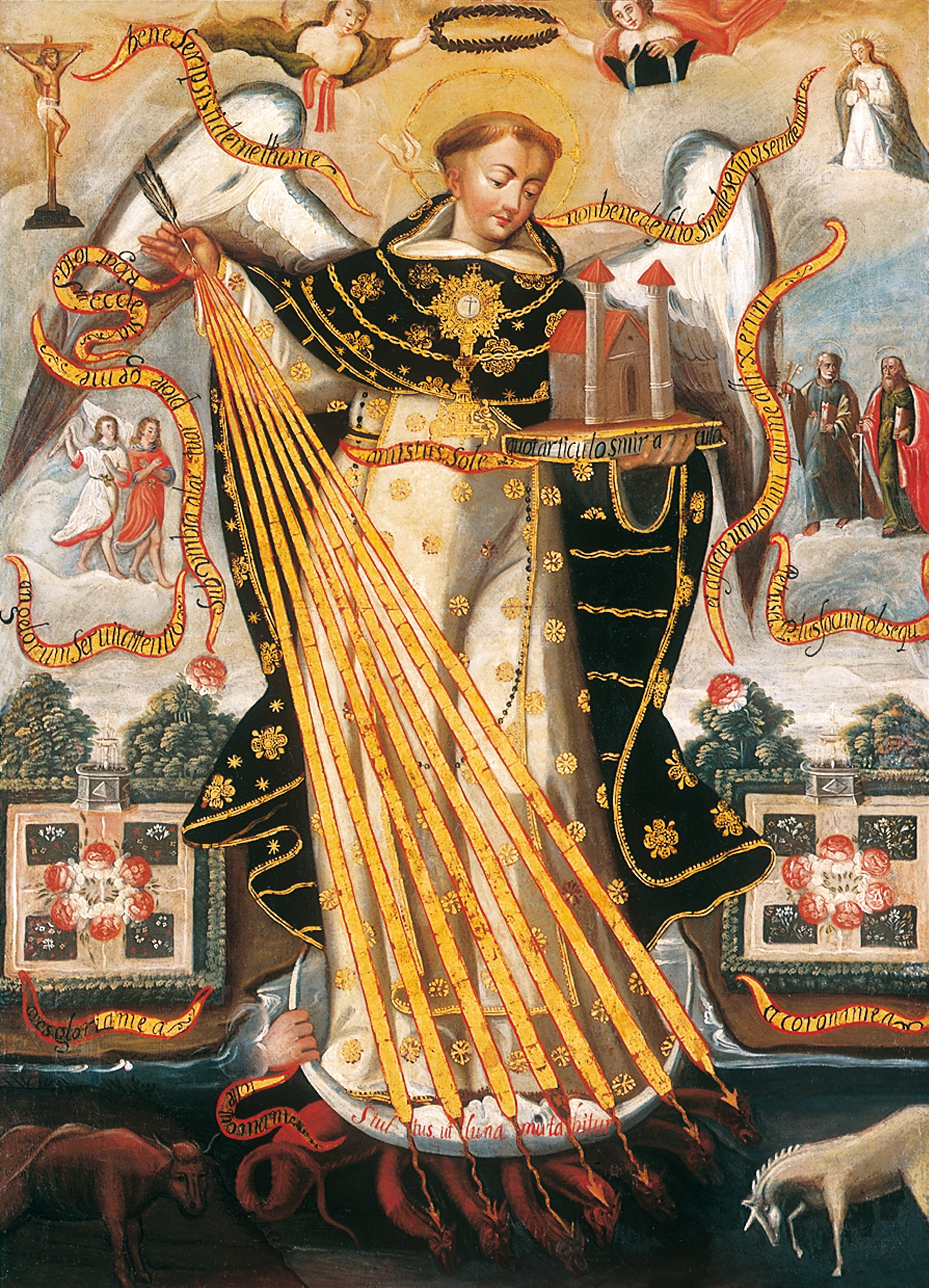 “Charity is the form, mover, mother and root of all the virtues.” – Saint Thomas Aquinas

“To love God is something greater than to know Him.” -St. Thomas Aquinas

“Almighty and ever-living God, I approach the sacrament of your only-begotten Son, our Lord Jesus Christ.  I come sick to the doctor of life, unclean to the fountain of mercy, blind to the radiance of eternal light, and poor and needy to the Lord of heaven and earth.  Lord, in your great generosity, heal my sickness, wash away my defilement, enlighten my blindness, enrich my poverty, and clothe my nakedness.  Amen.”  -St Thomas Aquinas

“May I receive the bread of angels, the King of kings and Lord of lords, with humble reverence, with the purity and faith, the repentance and love, and the determined purpose that will help to bring me to salvation.  May I receive the sacrament of the Lord’s Body and Blood, and its reality and power.  Amen.”  -St Thomas Aquinas 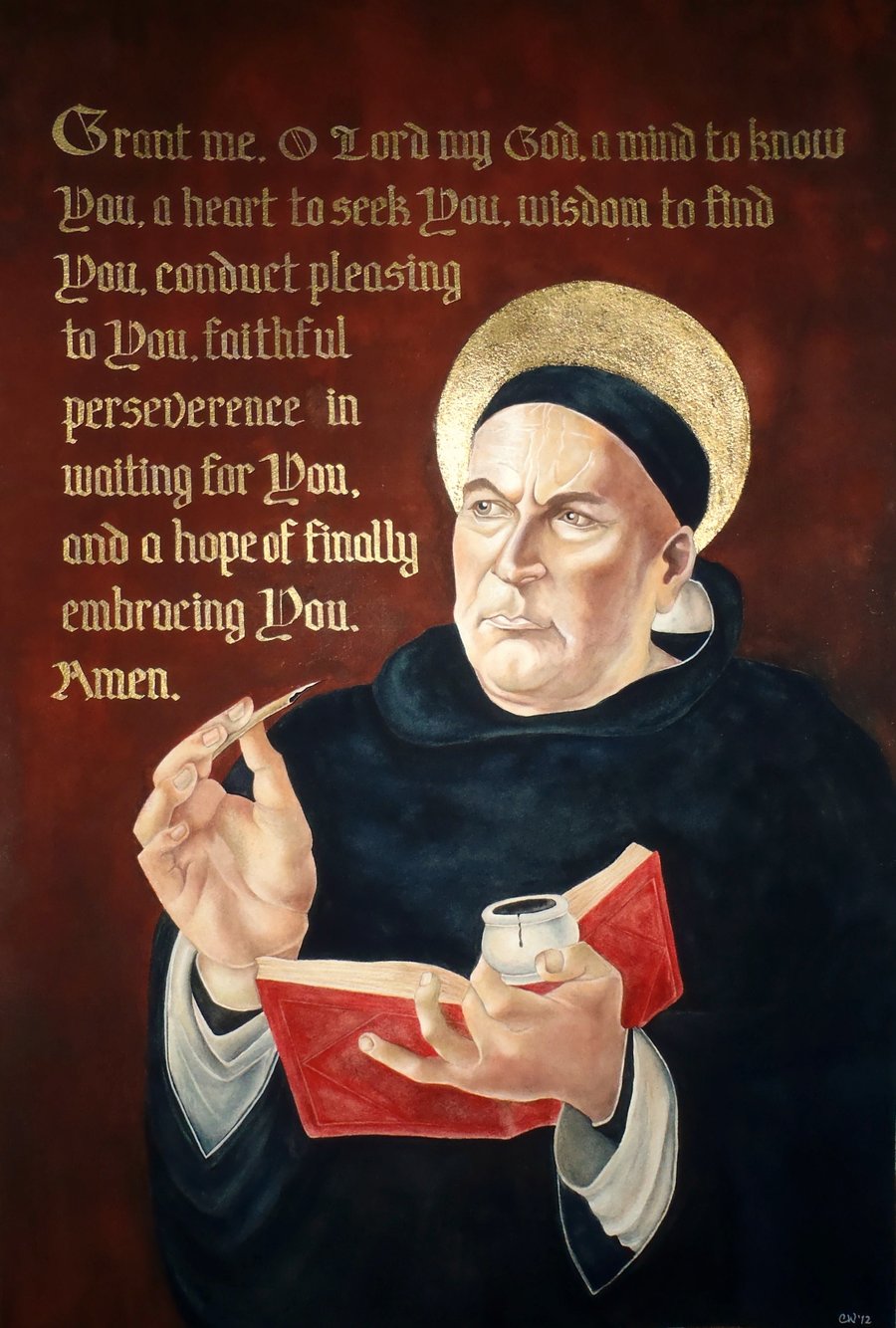 Wonderful Theologian and Doctor of the Church, you learned more from the Crucifix than from books. Combining both sources, you left us the marvelous “Summa” of theology, broadcasting most glorious enlightenment to all.  You always sought for true light and studied for God’s honor and glory.  Help us all to study our religion as well as all other subjects needed for life, without ambition and pride in imitation of you. Amen.

Father of wisdom, You inspired Saint Thomas Aquinas with an ardent desire for holiness and study of sacred doctrine. Help us, we pray, to understand what he taught, and to imitate what he lived.   Amen.