The cross bears the Kanji of “Father, Son, and Holy Spirit.”

The right spear bears the line from the cross of St. Benedict, which reads “Crux Sacra Sit Mihi Lux” which means “May the holy cross be my light!”

During 1593, Franciscan missionaries came to Japan from the Philippines by order of Spain’s King Philip II. These new arrivals gave themselves zealously to the work of charity and evangelism, but their presence disturbed a delicate situation between the Church and Japanese authorities.

Suspicion against Catholic missionaries grew when a Spanish ship was seized off the Japanese coast and found to be carrying artillery. Toyotomi Hideyoshi, a powerful imperial minister, responded by sentencing 26 Catholics to death.

Nagasaki, Japan, is familiar to Americans as the city on which the second atomic bomb was dropped, killing hundreds of thousands. Three and a half centuries before, 26 martyrs of Japan were crucified on a hill, now known as the Holy Mountain, overlooking Nagasaki.

Today the Church commemorates twenty-six martyrs, three Jesuits
and six Franciscans, crucified in Nagasaki, Japan, on February 5, 1597. Most were Japanese and most were laypersons and they were among the first martyrs of a young Church. The names of the martyrs are:

Among them were priests, brothers and laymen, Franciscans, Jesuits and members of the Secular Franciscan Order; there were catechists, doctors, simple artisans and servants, old men and innocent children—all united in a common faith and love for Jesus and His Church.

Paul Miki was born into a rich family. His father was an important military leader.  He was educated by Jesuits in Azuchi and Takatsuki. He joined the Society of Jesus and preached the gospel for his fellow citizens. The Japanese government feared Jesuit influences and persecuted them. Miki was jailed among others on the order of Toyotomi Hideyoshi, the national ruler, for preaching Christianity. They were imprisoned, then later marched through the snow to Nagasaki, so that their execution might serve as a deterrent to Nagasaki’s large Christian population. Paul Miki, SJ, and his fellow Christians were forced to walk 600 miles (≈966 kilometers) from Kyoto while singing “Te Deum” as a punishment for the community. Hung up on 26 crosses with chains and ropes, the Christians were lanced to death in front of a large crowd on Nishizaka Hill.

Brother Paul Miki, a Jesuit and a native of Japan, has become the best known among the martyrs of Japan. While hanging upon a cross Paul Miki preached to the people gathered for the execution: “The sentence of judgment says these men came to Japan from the Philippines, but I did not come from any other country. I am a true Japanese. The only reason for my being killed is that I have taught the doctrine of Christ. I certainly did teach the doctrine of Christ. I thank God it is for this reason I die. I believe that I am telling only the truth before I die. I know you believe me and I want to say to you all once again: Ask Christ to help you to become happy. I obey Christ. After Christ’s example I forgive my persecutors. I do not hate them. I ask God to have pity on all, and I hope my blood will fall on my fellow men as a fruitful rain.”

When missionaries returned to Japan in the 1860s, at first they found no trace of Christianity. But after establishing themselves they found that thousands of Christians lived around Nagasaki and that they had secretly preserved the faith. Beatified in 1627, the martyrs of Japan were finally canonized in 1862. 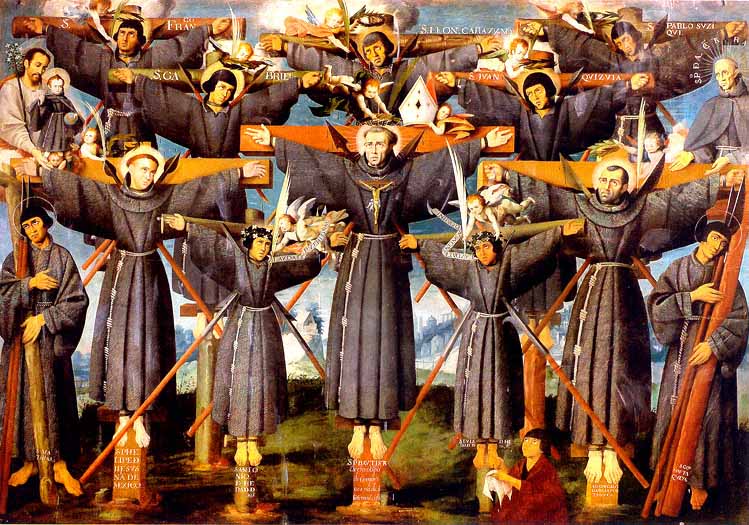 Exhibits at the Twenty-six Martyrs Museum and Monument (http://en.wikipedia.org/wiki/Twenty-Six_Martyrs_Museum_and_Monument) include “fumi-e“, literally “step-on pictures” or treading images. Every year from 1629 to 1857, Nagasaki residents were forced to go through a ritual of stepping on bronze images of Christ or Mary to prove they were not Christians. -“fumi-e”, treading images, notice the worn away details from being stepped on, please click on the images for greater detail.  A metaphor for our time?

“Since Jesus, the Son of God, showed his love by laying down his life for us, no one has greater love than they who lay down their lives for Him and for their sisters and brothers (see 1 John 3:16; John 15:13).

Some Christians have been called from the beginning, and will always be called, to give this greatest testimony of love to everyone, especially to persecutors.

Martyrdom makes disciples like their Master, who willingly accepted death for the salvation of the world, and through it they are made like Him by the shedding of blood.

Therefore, the Church considers it the highest gift and as the supreme test of love. And while it is given to few, all, however, must be prepared to confess Christ before humanity and to follow Him along the way of the cross amid the persecutions which the Church never lacks” (Dogmatic Constitution on the Church, 42, Austin Flannery translation).